"Refinancing your home loan is an under-utilised way to save money and boost cashflow that can be the difference between a successful and unsuccessful investment." - Jesse Lee, Digital Product Manager

New research from Aussie, now part of the Lendi Group, shows a disconnect between home owners thinking about refinancing and actually doing it.

The survey of 1,003 Australian adults commissioned by Aussie showed 62% were aware of the benefits of refinancing, despite only 20% actually refinancing their mortgage in the past 12 months.

More than half (54%) have never refinanced, and more than a quarter (28%) also said they are unaware of their own home loan interest rate.

Lendi customer data between 1 May and 31 July showed customers were saving an average of $1,988, refinancing by an average of 81 basis points (0.81%).

According to Lendi Group CEO, David Hyman, the low interest rates on offer mean Australians are missing out on the 'full potential' of refinancing, citing recent lending indicators data from the Australian Bureau of Statistics.

"There are approximately six million outstanding mortgages in Australia, and less than 450,000 of those have been refinanced in the last financial year, despite unprecedented low interest rates," Mr Hyman said.

"The gap here is staggering. With three quarters of Australia in lockdown, we understand that refinancing may not be top of mind right now, but by not setting aside a small amount of time to look at their home loan, Australian mortgage holders could be missing out on thousands in savings, which could be really helpful for many families especially in the current pandemic."

Of the reasons given for not refinancing, 22% were unsure how to begin the process, 18% said they already have a good deal, and 24% said they were concerned about being worse-off.

In periods of uncertainty, such as COVID-19, the big four banks generally win as customers seek security.

This is evident in CommBank's results from the last six months of 2020, which saw its loan book grow by 1.5-times the general market's growth.

Fixed mortgages in particular grew 38% compared to the first half of the year.

However, the latest data from the Property Exchange Australia, or PEXA, shows an uptick in refinancing in August 2021 compared to a slower July.

Across all four states, non-major banks overtook the majors in net new loans - the first time in about a year.

An example of majors' versus non-majors' net positions for NSW can be seen in the graph below. 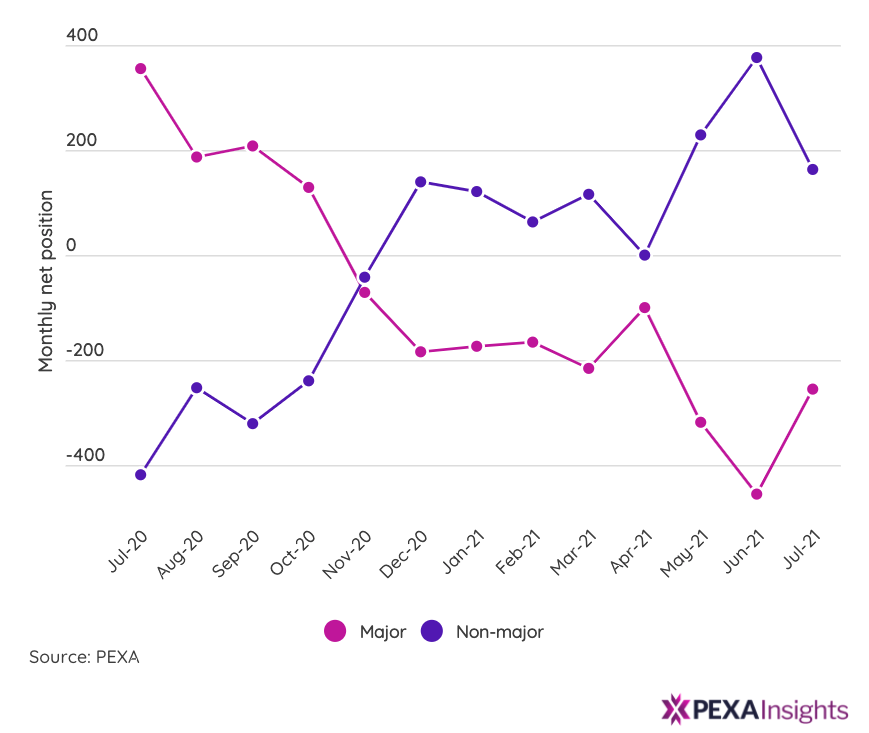