"Property investment in Brisbane has a bright outlook as house prices are predicted to increase by 20% in two to three years." - Ben Crow

The bank says residential property prices are now expected to experience a 5 per cent correction through to late 2021 before a 15 per cent surge over the following two years.

Properlytics lets you forecast the growth of your property, so you can plan accordingly.

Westpac’s economics team initially forecast an average 10 per cent slide in property prices nationally through to June next year when the first wave of Australia’s coronavirus pandemic was at its peak in April.

While the bank still believes national prices will continue to ease, its economists have substantially revised their outlook.

Westpac chief economist Bill Evans and senior economist Matthew Hassan now forecast prices will fall 12 per cent in Melbourne, 5 per cent in Sydney and 2 per cent in Brisbane over that time.

“For the near term, our revised view this means prices nationally are now only expected to fall a further 2.3 per cent out to June next year,” Evans said.

“Of most importance is that we are much more optimistic about the pace of price appreciation over the following two years with a total expected increase of around 15 per cent.”

Nationally, prices have already declined 2.7 per cent since April.

Property prices have dropped 4.6 per cent in Melbourne since the onset of the Covid-19 pandemic and Sydney’s prices have dipped a more moderate 2.6 per cent.

At present, Corelogic indices show that six months after the March shock, house prices are gradually stabilising or starting to slowly climb again in Sydney, Canberra, Adelaide, Brisbane and Perth.

Economists said the correction would occur over four distinct stages, with the first—the initial impact on prices from the collapse in economic activity in the June quarter—largely passed. 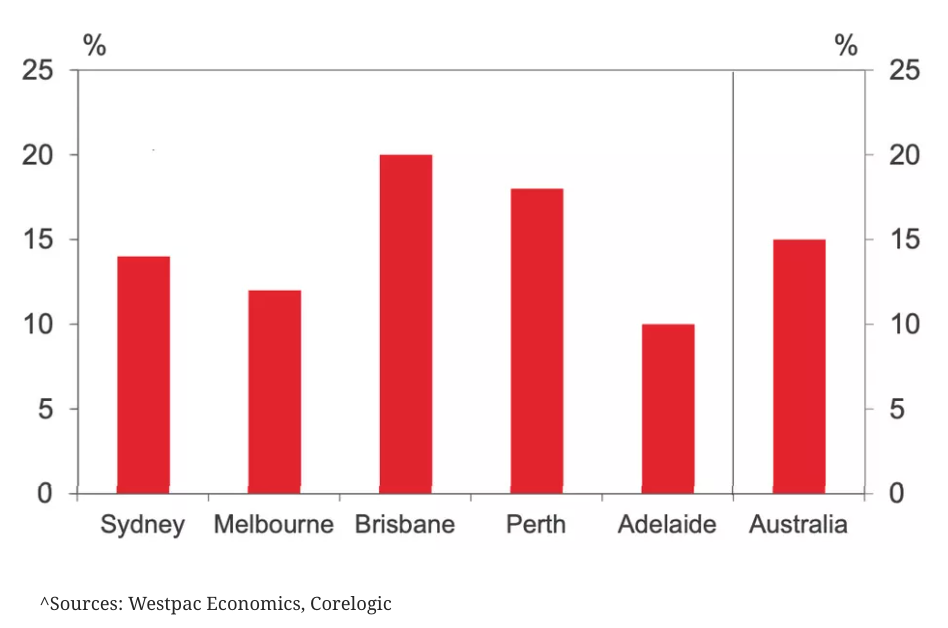 “The second stage, which will cover the December and March quarters, will be a period of relatively stable prices, possibly with some modest increases, although Melbourne will be at least one quarter behind the other states and will still be experiencing falls in prices in the December quarter,” Hassan said.

“The third stage will see some limited resumption of downward pressure on prices through 2021, as we see an increase in ‘urgent’ or distressed sales relating to borrowers struggling or unable to resume mortgage repayments.

“Nevertheless, there will be pockets of weakness associated with inner–city high–rise markets in Sydney and Melbourne and those overstretched borrowers who will be exposed by the failure of their underlying businesses.

“The fourth phase will come once this selling pressure has worked through the system and prices lift again.”

“The key question here is around the scale and intensity of selling pressure as continued financial distress leads some borrowers into ‘urgent sale’ situations," Evans said.

“Nationally there are about 410,000 properties sold each year and if 10 per cent of loans currently in deferral wind up on the market, that would see 60,000 ‘urgent’ sales accounting for 15 per cent of all turnover.

“This would be enough to shift prices, particularly in areas where there are higher concentrations of these sales and demand is softer.”

Earlier this month, Commonwealth Bank dialed back its price fall prediction, anticipating a 6 per cent fall over the next six months, lower than the 10 per cent drop it forecast in April.

Hundreds of variables are used to produce detailed cashflow projections.