Investors are Back as New Home Loans Fall

"While owner-occupiers have been the biggest driver of the current surge in house prices, the figures show investors are once again emerging as a force." -Miguel Nitorreda, Data Analyst

New investor loan commitments rose for the 12th consecutive month in October, while lending to owner-occupiers dropped by more than $800 million, according to new data.

The Australian Bureau of Statistics (ABS) data also showed the value of total home lending fell for the third month in a row to $29.57 billion, which was a 2.5 per cent drop on September (seasonally-adjusted).

Despite this, investor lending continued its year-long climb, rising 1.1 per cent, or $109 million, to $9.73 billion, which is the highest level since April 2015.

Real Estate Institute of Australia President Adrian Kelly said it was positive news to see the return of mum and dad investors, who have been especially active in Queensland, South Australia, and New South Wales.

“The housing market has seen significant growth over the past year and it was a sign this sector provided strong returns and future growth in many states and territories,” he said.

RateCity.com.au Research Director Sally Tindall said the rise in investor lending was unlikely to be enough on its own, to spur the Australian Prudential Regulation Authority (APRA) to take further action.

“While the value of investor lending is nearing an all-time high, as a proportion of all new loans it’s still a way off from smashing any records,” she said.

“The recent surge in housing stock and the changing sentiment on the back of rising fixed rates could be enough to cool the property market without any further intervention from the government regulators.” 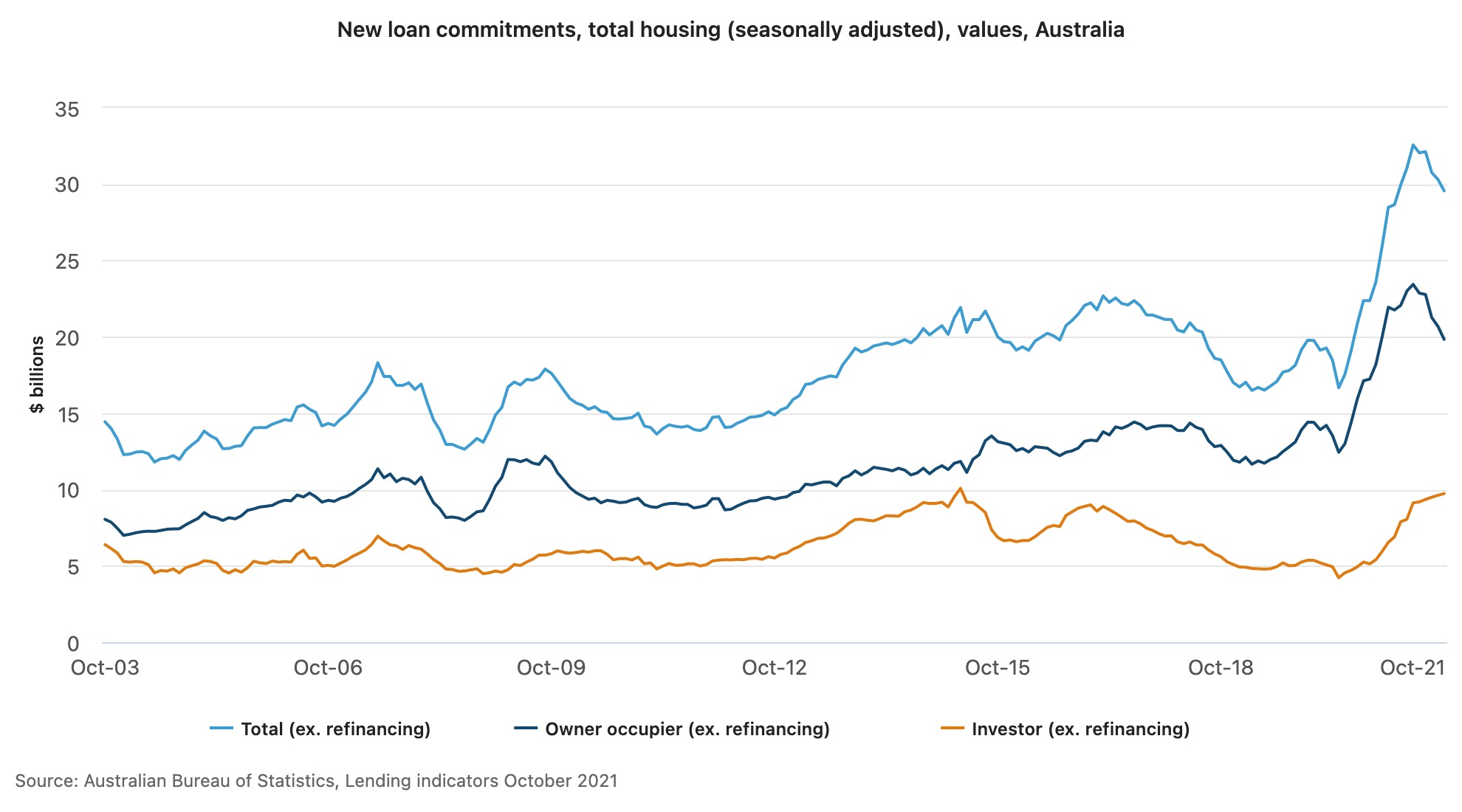 The ABS statistics also show that the value of owner occupier loans fell 4.1 per cent to $19.84 billion in October, with lending to first home buyers dropping 4.8 per cent on September, to $5.19 billion.

“Of interest is that the drops in the number of owner-occupier first home buyer loan commitments were seen across most states and territories, with the ABS reporting Western Australia saw a massive fall of 13.8 per cent, while Queensland fell by 6.3 per cent and NSW by 4.3 per cent,” he said.

“Small increases were recorded in Victoria, which rose by 1.9 per cent, while the Northern Territory increased by 6 per cent, showing these sectors remain in high demand.”

Ms Tindall said the number of first home buyer loans fell 3.8 per cent in October to be down 29.9 per cent since their January peak.

But she said it wasn’t all doom and gloom, with many first home buyers still getting their foot on the property ladder.

“While proportionally first home buyers are being weeded out, more than 140,000 owner-occupier first home buyer loans have been approved so far this year – that’s more than 4000 more loans than in 2020, with two months worth of data still to come,” Ms Tindall explained.