"No one can predict with absolute certainty what is going to happen in 5 years time, but there are a few indicators that can lead us to a certain direction." - Jesse Lee, Digital Product Manager

Head of research at Propertyology, Simon Pressley, identified 10 new trends that will play out in the property market in the next five years.

Mr Pressley (pictured) gave his two cents as to what he sees emerging as major themes in the next five years in Australia's property market.

"At a national level, the biggest influences on future real estate performance will be the actions of a few key people in high places," he said.

According to Propertyology, there is a divergence in rental supply between capital cities and in regional areas, with Sydney and Melbourne having a combined rental vacancy number of 43,607.

"While Sydney and Melbourne have a significant surplus of rental accommodation, the 15 million people who live in the rest of Australia only had a combined 17,706 dwellings available," Mr Pressley said.

"There are countless stories of businesses all over Australia advertising jobs but unable to attract candidates because there is no accommodation available.

"Annual rents have already increased by thousands of dollars in more than 40 Australian cities. The problem will get significantly worse before it gets better."

"Our two biggest cities continue to have the most concerning property market fundamentals in all of Australia," Mr Pressley said.

"With each week that Sydney or Melbourne is in lockdown my fears for their future economic health increases.

"Melbourne has already been locked up for more than 200 of the last 500 days. And it appears highly possibly that the current Sydney lockdown could surpass 100 days."

Mr Pressley also said the current government support, both at state and federal level, can only go so far.

"It may take a while longer for everyone to properly understand the economic and property market legacy of frequent lockdowns," he said.

"Over the last 18 months, Propertyology has observed an insatiable appetite for open space, natural environments, and work-from-home flexibilities. The regional relocation trend will continue to gain pace," Mr Pressley said.

"Over the first 12-months of COVID-19, regional Australia had a net population increase of 44,000 from internal migration while Sydney and Melbourne each had a population decline of 32,000."

This has caused what's called 'divergence', especially among house prices versus unit prices. Regional markets now have some of the most expensive rents in the country.

"The financial statements of each of Australia's state governments will be tested significantly over the next 5-10 years. State economies and property markets will be affected," Mr Pressley said.

"I will not be the slightest bit surprised if the RBA begins lifting interest rates as soon as the next federal election is out of the way," Mr Pressley said.

"Whenever interest rates do rise, it will be a good thing because it will be recognition of a strong national economy and many COVID uncertainties behind us."

This goes against the grain of the official message from the RBA - that rates will not rise until 2024. However, a few leading economists have also predicted an 'earlier than scheduled' rate rise.

In 2020 there were three cash rate cuts, and according to Mr Pressley, future interest rate rises could be offset by wages growth, and that property prices will still rise but at a slower pace.

"Last year, Australia's construction sector was stimulated at a time when the national population growth rate was the lowest in more than 100 years," Mr Pressley said.

"Propertyology anticipates that, by 2022-23, property markets in some bigger profile locations may be confronted with over-supply challenges."

The Federal Government supported the construction sector immensely in 2020 through initiatives such as HomeBuilder and small business stimulus, while various state governments also supported the industry.

The First Home Loan Deposit Scheme (FHLDS) for a time also only supported first home buyers buying or building new homes, which some pundits criticised as being too narrow in scope.

7. A more 'unhealthy reliance' on China

That said, for property itself, foreign investment appears to be an overblown phenomenon - the latest ABS lending data shows there was just $245 million in loans written to 'non residents', for an average value of $704,310 (chart below).

This pales in comparison to the wider value of loans written in July, amounting to more than $32 billion. 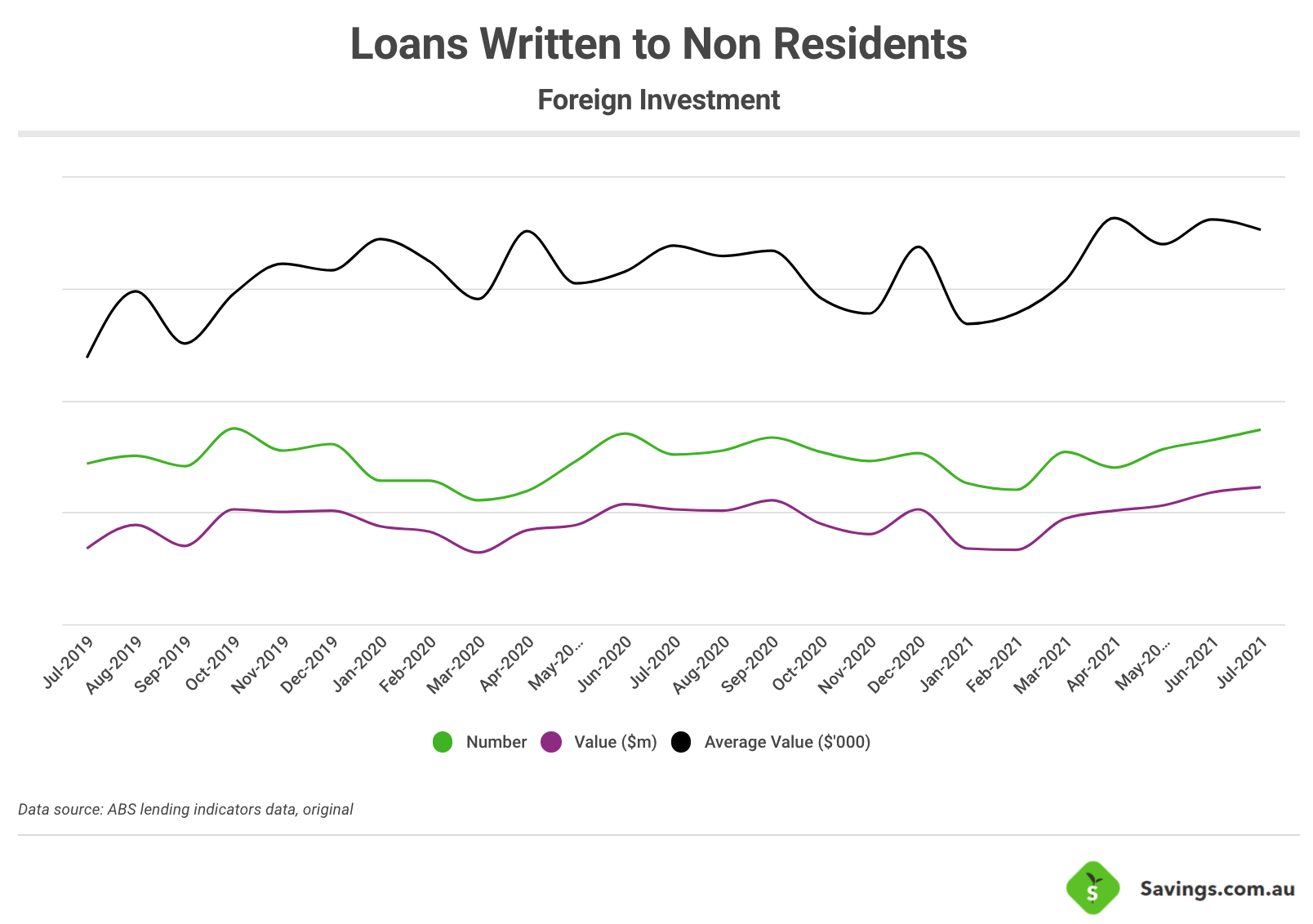 "The economic pendulum has well and truly swung away from Sydney and Melbourne and more towards the smaller capital cities and especially regional Australia," Mr Pressley said.

"Accordingly, it is highly probable that a significantly smaller ratio of Australia's future overseas migration intake will be placed in our two biggest cities."

Mr Pressley said a growing trend among state governments will be moving from a stamp duty model to a land tax model.

The ACT has already introduced a version of the idea, while NSW has flirted with it too.

"While I think it is less likely than likely that APRA [the prudential regulator] will bow to growing calls to again squeeze credit, their track record for considering big-picture consequences is not good," Mr Pressley said.

"One can only hope that the APRA Board does not wish to leave a legacy as economic destroyers and dream-breakers."

However, recent APRA data shows home buyers are increasingly borrowing at larger ratios relative to their income, and New Zealand has already clamped down on lending standards.